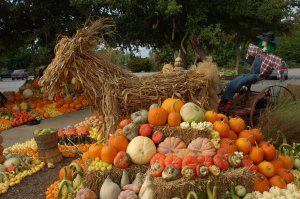 Fall Break started for Karen and me on Friday afternoon, when we frantically packed and got ready to go to Jackson after a busy Friday. Her Thursday-Friday involved Spanish, Voice Pedagogy, and Aural Skills tests, so she had no time to pack. I had three geography tests (Geog of Europe, Remote Sensing and Cartography) Monday-Wednesday, so by Thursday I was ready to get a break (and thus went to the awesome UTM-Eastern Illinois football game) and didn’t pack for Jackson.

We were only kind of late (later than said we would get there, but still in time to eat supper before Julie and the kids got there!) We called it an early night because Karen, Anita, and I had to get up and go to Memphis early the next day.

We got to Memphis around 10:30, and I was promptly dropped off at the Apple store while Karen and Anita looked at wedding dresses and bridesmaid dresses. Lucky for everyone, the store had both the right dresses and a good deal, so we were spared a drive to Low’s Bridal in Brinkley, Arkansas, to continue the quest. I was able to burn an hour at Apple before “burning out.” One can only look at the same tech stuff for so long, without drooling or running out of things to play with.

So I sat outside for a while.

For an hour. But the weather was very nice! The high was only 85, and that didn’t occur until later in the day, so my guess is that it was upper 70s, with mostly sunny (I watched the frontal boundary move through the area with puffy cumulus clouds.)

On top of doing some impromptu meteorology, I also took an amateur’s stab at analyzing the urban landscape around me. In case you aren’t familiar with the Apple store in Memphis, it is technically located in the Saddle Creek outdoor shopping center of Germantown. The area is easily describable as affluent, with its upper-middle class shoppers, expensive clothing stores, Williams Sonoma, and Apple. Needless to say, I felt a bit out of place with my blue jeans and UNC shirt…

But I wish I had had my camera. I got a few shots of the area when Anita and Karen came back (my camera was in the car) but there were a lot of good photo opportunities I missed!

I thought long and hard about the whole Saddle Creek set up, and in the end I decided that I like the concept and (mostly) approve of its design. The layout of the main section (there are two smaller sections across the road) is similar to an “M” with parking inside the outer set of shops and building space for two stores at the focal point in the middle of the shape. If you are really curious, see a PDF of the layout. 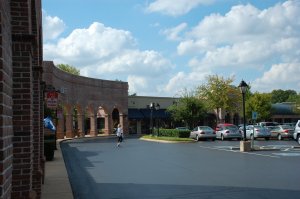 At the two bends in the outer set of shops are brick facades with Roman-esque arched openings. The store fronts themselves are different, as per each parent corporation’s choosing, but they mostly work together in a modern design theme that incorporates similar materials–glass, steel, and brick–and shades to form a unified front that doesn’t have weird juxtapositions. My guess of when it was built was off a little: I was thinking mid-’90s, but according to their Web site, www.shopsofsaddlecreek.com, the complex was built in the late ’80s. My guess of the age was based on a few small signs of wear: seams in the concrete that have been filled with a slightly different color; cracks in mortar of the brick columns; a couple businesses that are have closed in the last few months.

The site as a whole is definitely still economically viable. There were a lot of people out shopping, and many demographics were present: Caucasian, Asian-American, African-American; rich, white collar, not-so-wealthy; geeks (for the Apple store) and trendy high schoolers; old and young. This place appeals to everyone. If I had to guess at the motivating factors for people to shop here, I would say that it’s the atmosphere and the quality of shops that draw people. The outdoor atmosphere is fun and relatively peaceful (despite the tornado siren test that took place around noon.) The closed-in space feel more intimate than a huge megamall. There is light rock and oldies music playing on outdoor speakers, and there is a decent amount of green space (and two water fountains) included also.

There is also an effort to connect with the community. The shops of Saddle Creek currently are sponsoring an outdoor art exhibit of painted horse statues (remind anyone of the Berlin Bears?) in honor of the 60th Germantown Charity Horse Show.

So while I had to sit there for an hour, at least I got to put my geography skills to good use, right?

The rest of the day was spent spending money (that second theme I referred to in my title). Mostly buying clothes on my part…I’m sorry to say it, but I spent money at Gap and Old Navy. (Didn’t I used to hate those places with a passion…?)

Anyway, to continue the money theme, I’ve spent a large part of today dealing with money. I’ve set out a basic plan of setting up an IRA, converting my existing savings account to a money market account with a better interest rate, putting some money in a one-year CD through Capital One’s online banking services (top 3 in terms of high rates nationally, and a very stable bank according to multiple services), and finally investing some in either stocks or mutual funds. To work toward the IRA and investing, I set up an account on etrade.com and started examining the wide variety of options they offer. I also checked my credit report online for my free annual check.

Again, money’s the big theme. Interwoven with geography and money have been Berlin (I’ve been catching up on some reading and now need to catch up on writing), family (we went to the UT Experiment Station today!), food (of course), and photography (I want a Nikon D90!)

The girls at the experiment station.

I kind of doubt I’ll post again during the break, but suffice it to say that tomorrow will be spent out in Jackson with Karen and catching up with my Germany buddy Tracy Shelton and his wife, and work on the Berlin research. (Hopefully I’ll get some photos posted to Flickr soon, either of Berlin stuff I’ve been meaning to upload or of new stuff from this fall.)